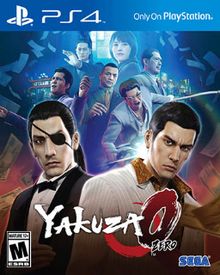 This game was never on my radar, but was exposed to it through the podcast Dropped Frames. After listening to a couple of episodes where they talk about Yakuza 0, I decided to pick the game up and see it for myself.

This game takes place in the late 1980’s Japan, when Kazuma Kiryu (living in Tokyo), a Yakuza member, is doing a job by teaching a businessman a lesson to pay up his dues. However, due to unfortunate events, he decides to leave the Yakuza life. At the same time, Goro Majima (living in Osaka), an ex-Yakuza member, is currently running a cabaret club called “The Grand” in order to get back into the Yakuza family. Likewise, due to unfortunate events, he is forced to do what is right for him.

There are a lot of things that I enjoyed, but there are a lot of things that felt like it was lacking. Yakuza 0 lets you play with two main protagonists that have different play styles and different story lines. Each character gains three different fighting styles that they pick up throughout the game and are able to upgrade the style through a skill circle. Additionally, the game is very rewarding when completing different tasks and missions by giving you Completion Points (CP). You are able to redeem the CP at a shrine in order to progress the mission faster and also help buff your character.

It took me about 32 hours to complete the main story line and was only able to get to 13% completion. There are a ton of side missions that expands from funny to sad and it accompanies with background music respectively.

I was hoping this game to be more like Mafia II where it is not fully open world. You will be walking/running around a lot although there are some fast travel taxis. These taxis are only on the corners and you still need to walk/run a good amount to get to your destination. I only wished that they provided you with some sort of a scooter to go faster instead of just running. Also, it would have been nice if they added a way point feature in this game because I was constantly checking the map even though they provide you with a mini map on the screen. Additionally, you will often have to constantly run away or encounter people around the city wanting to fight you and after a few encounters, it was getting on my nerves.

Another thing, the items in your inventory will get full, then you can either go to the item box located in the payphones across the city to switch items or sell them. However, the pawn shop is the only place that you are able to sell items. Lastly, there are a lot of cut scenes throughout the game and you will need to watch them in order to understand what the story is all about.

The voice overs in this game are amazing, but something that was bothering me is the fact that they had to add voice when I talk to someone through in-game; the person says the first syllable and stops. Additionally, the mini games are a fun way to pass time when you are tired of doing the main missions. The protagonist gets so dramatic when entering a game. Lastly, the karaoke in this game is funny when they go over the top in the singing, but on the other hand, the dancing game (disco) is one of the games that I hated it.